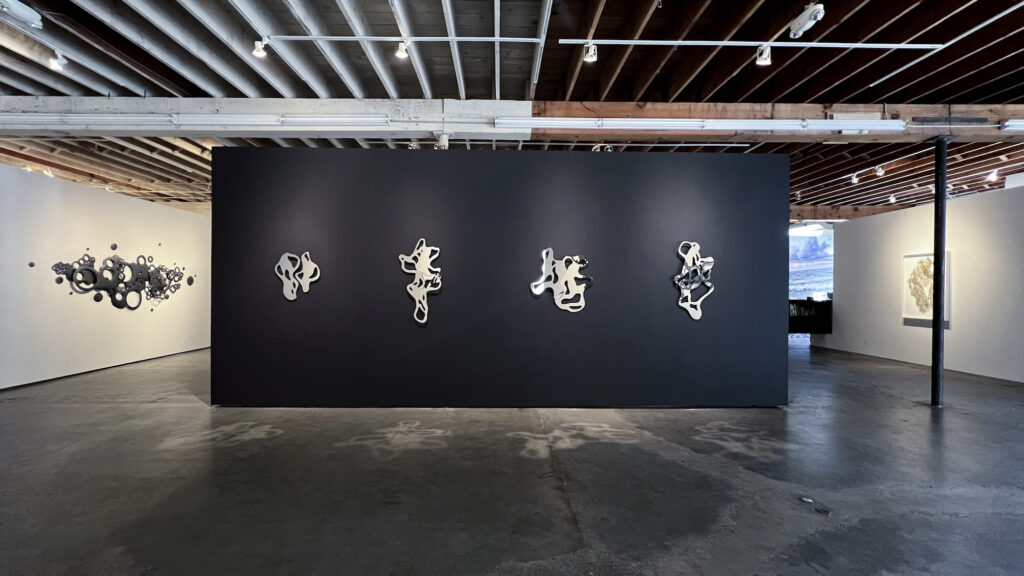 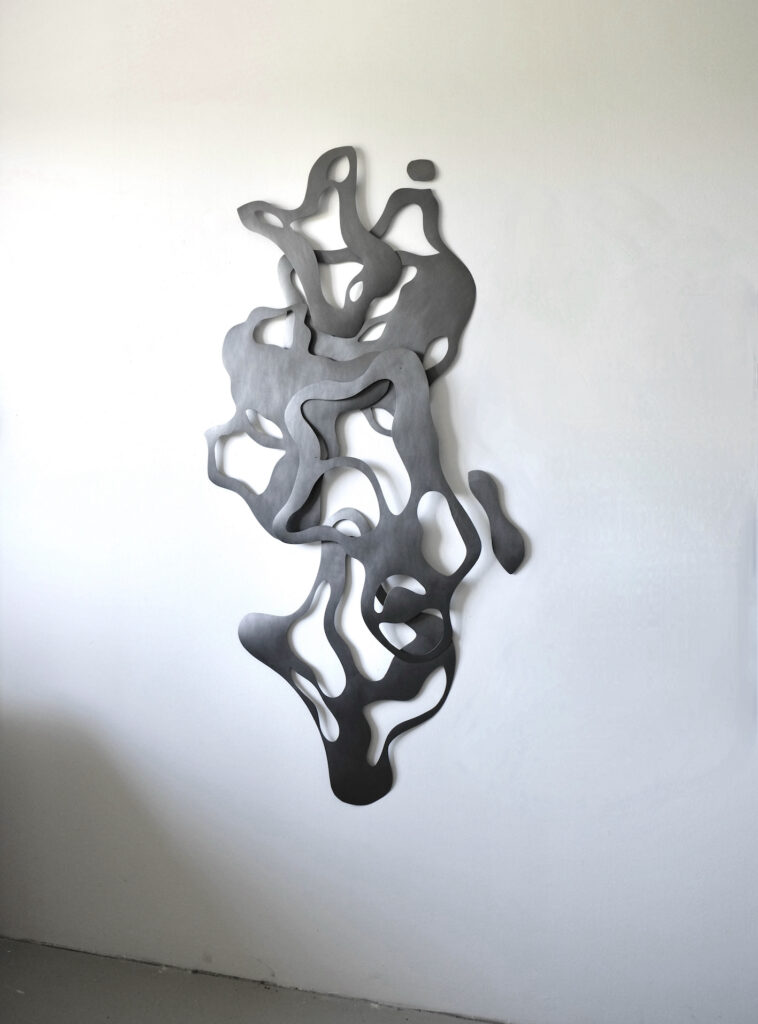 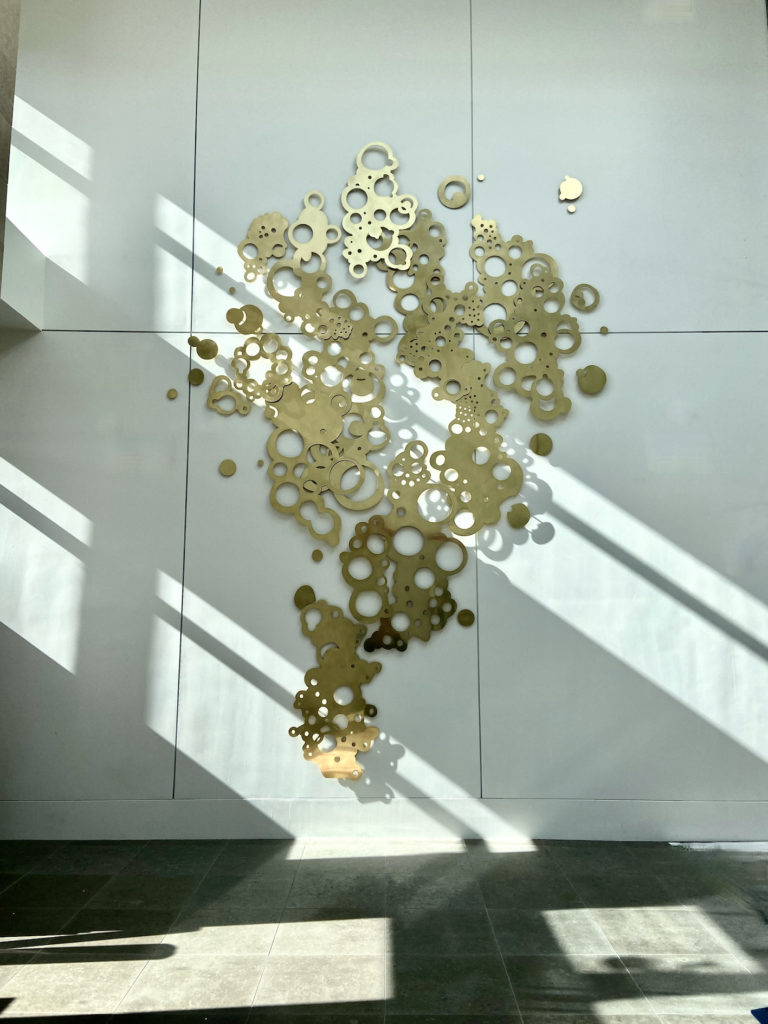 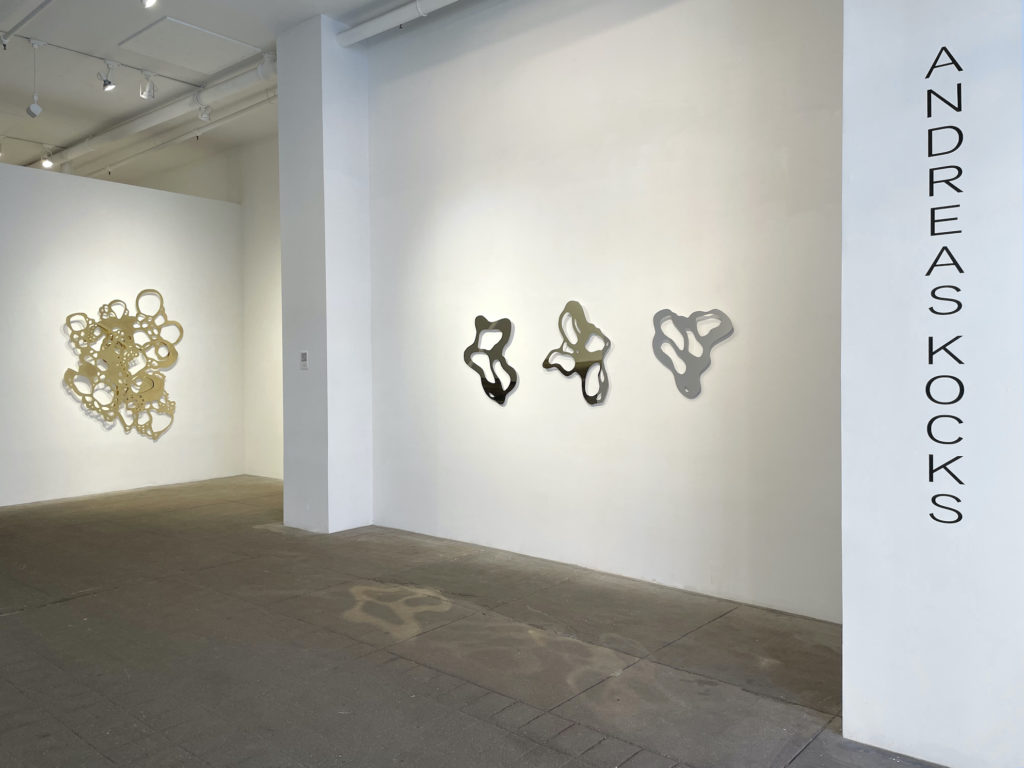 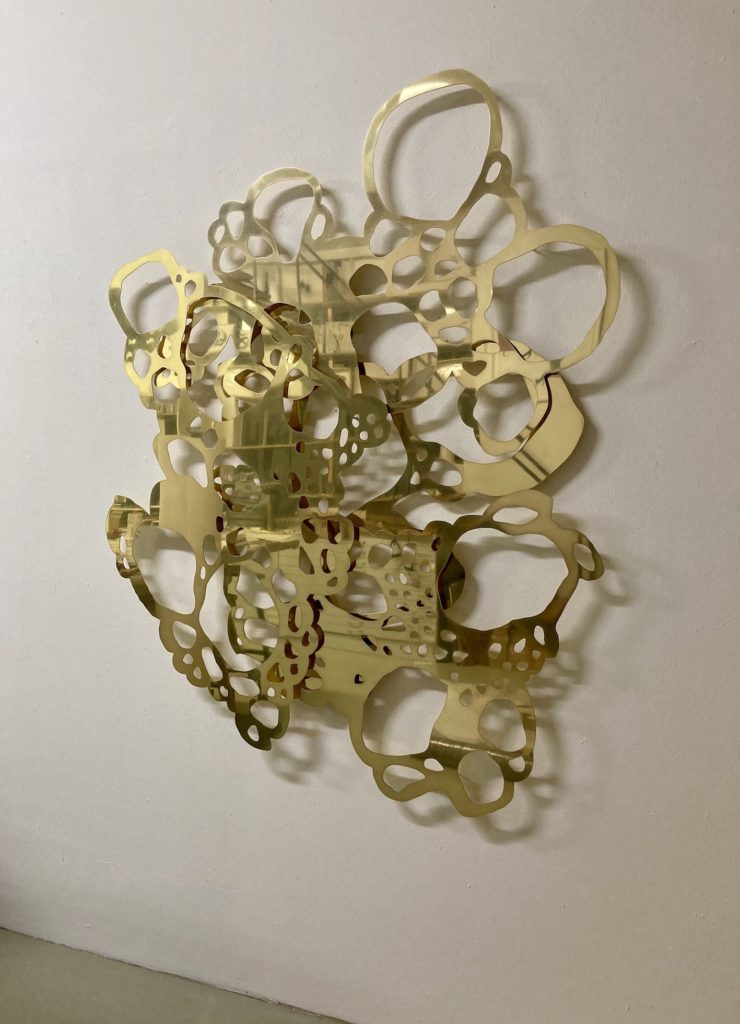 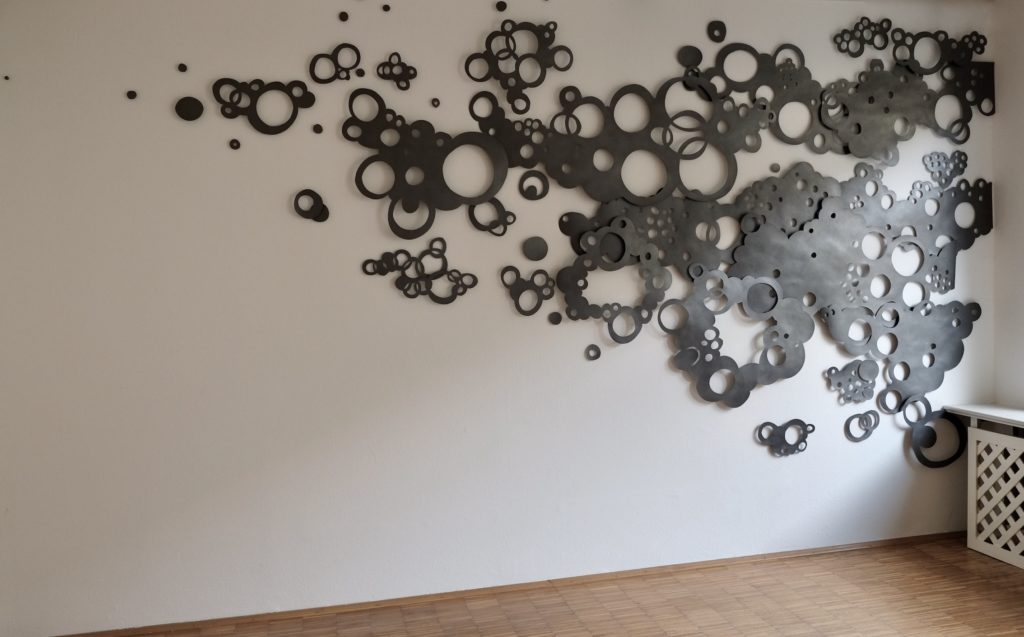 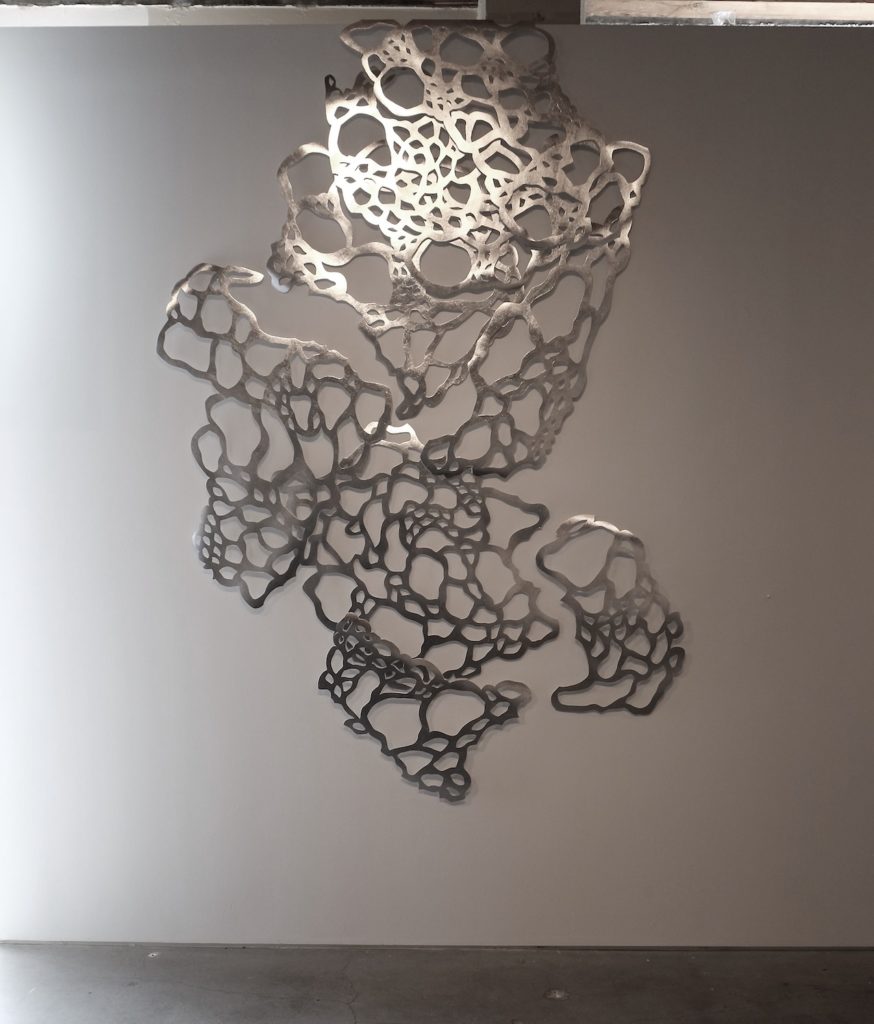 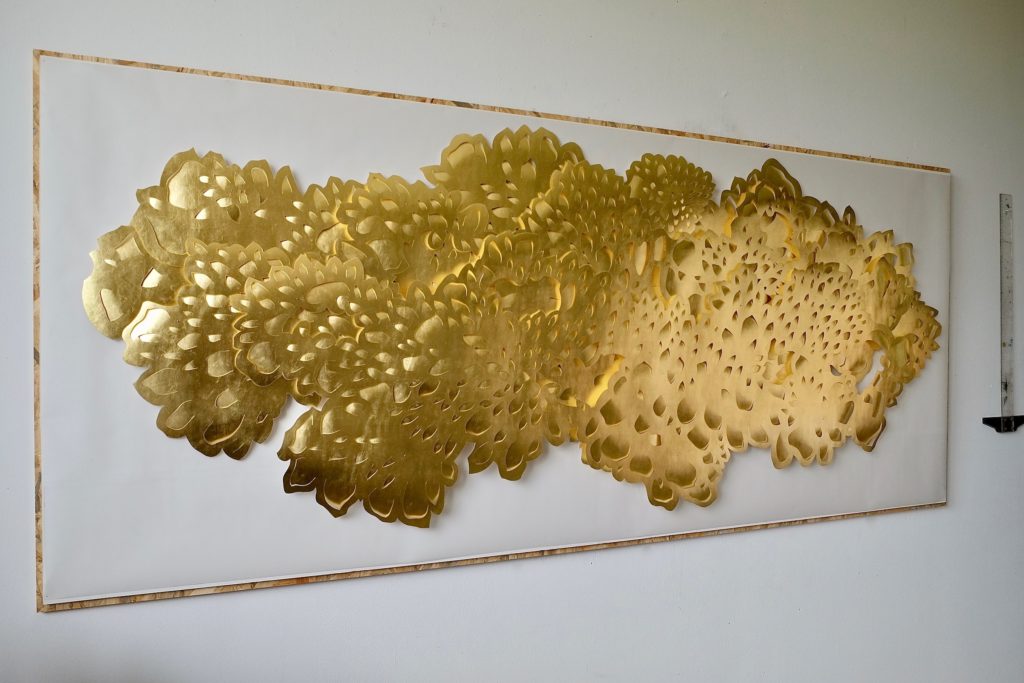 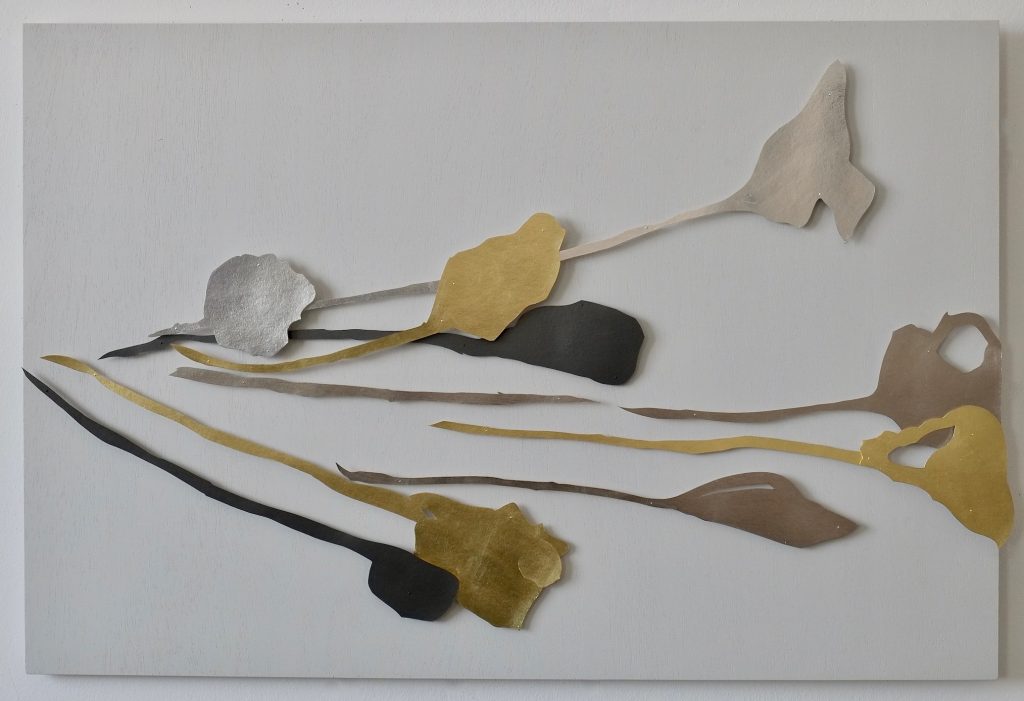 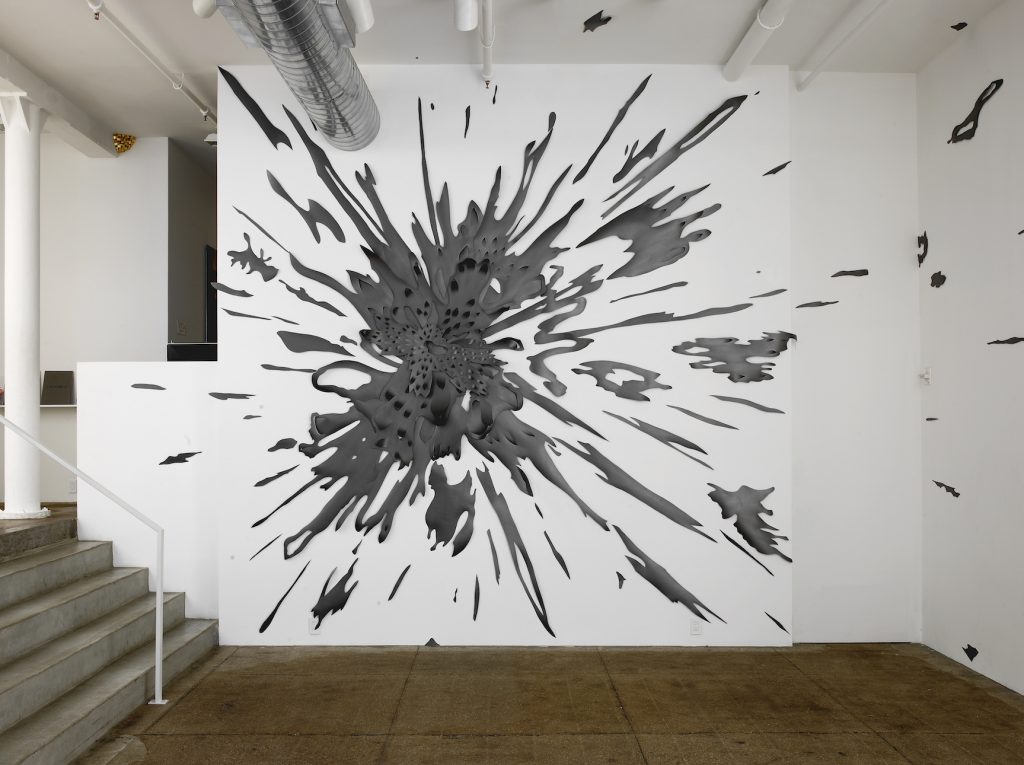 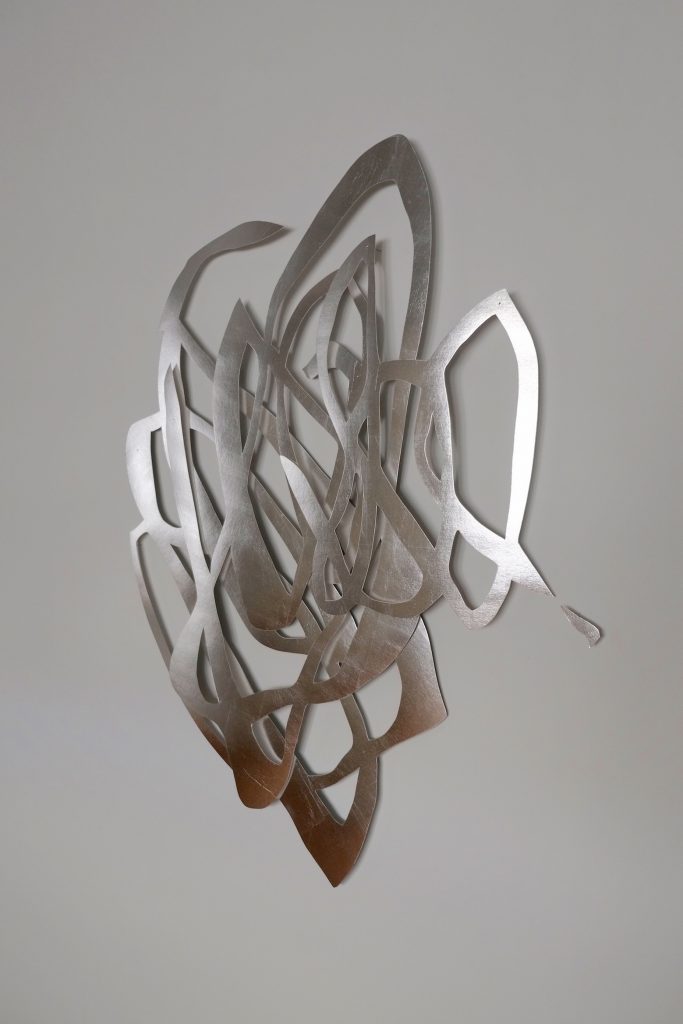 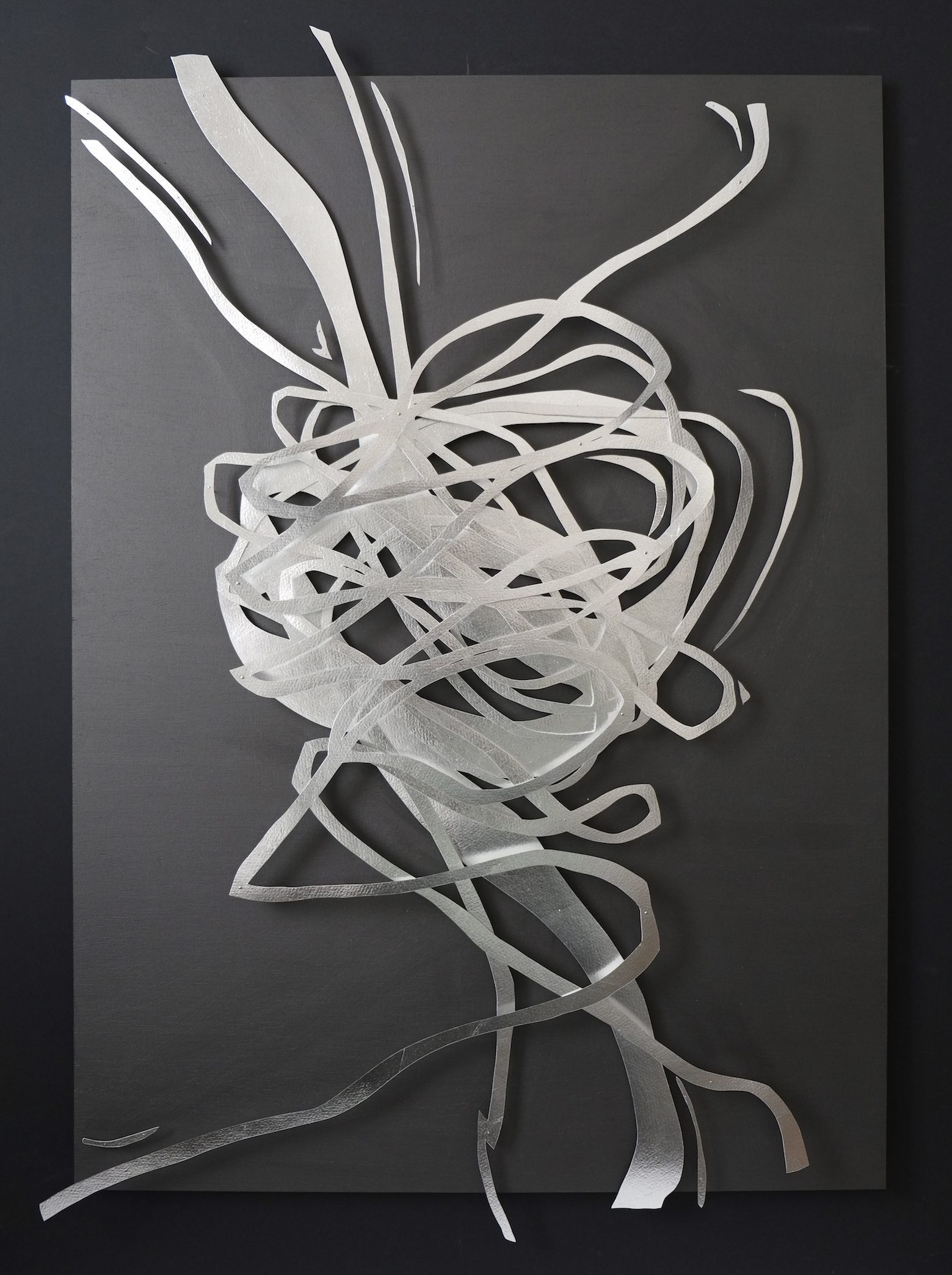 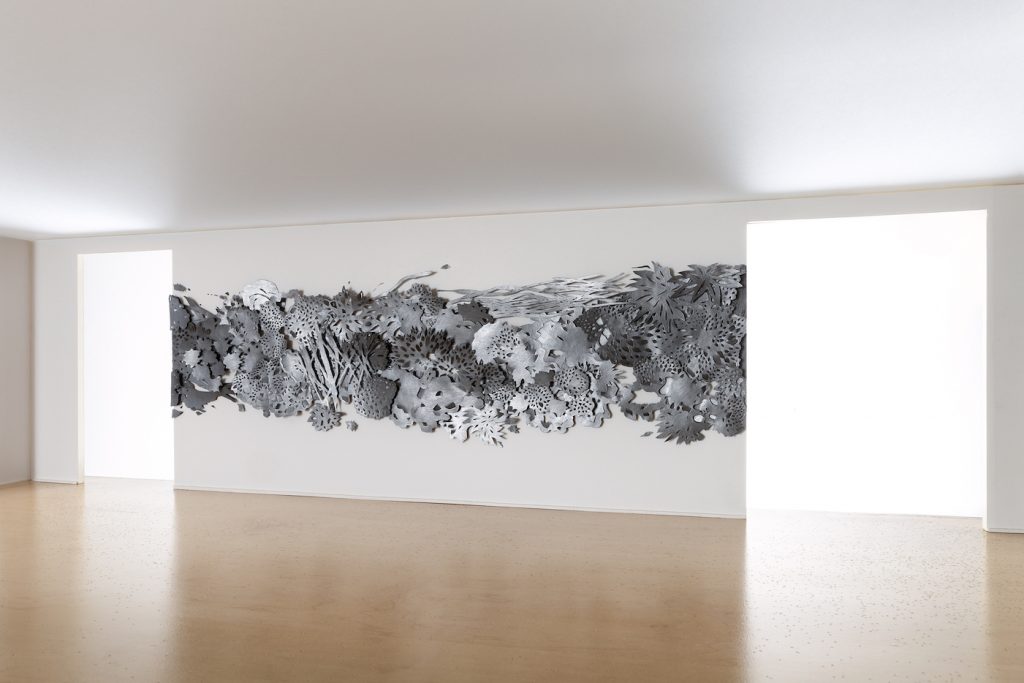 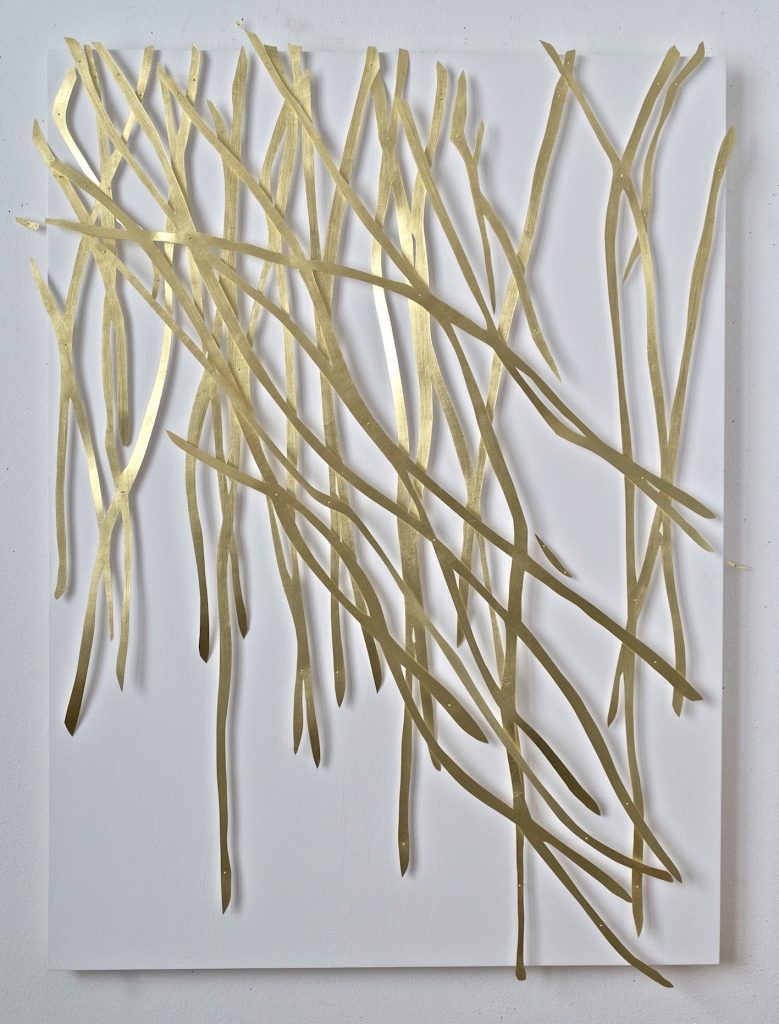 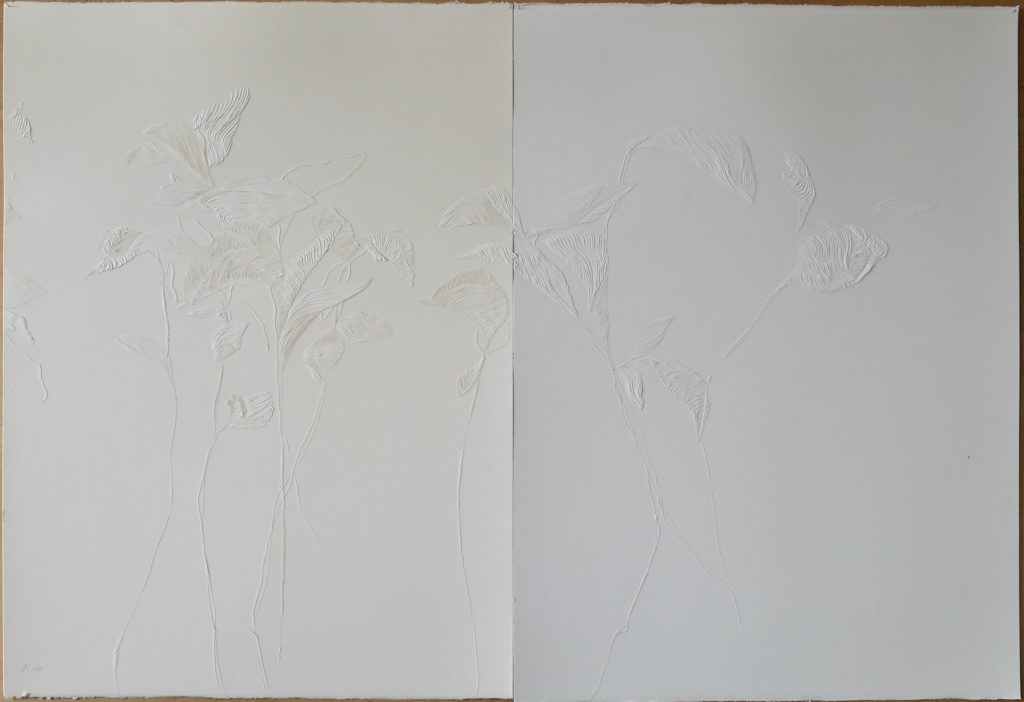 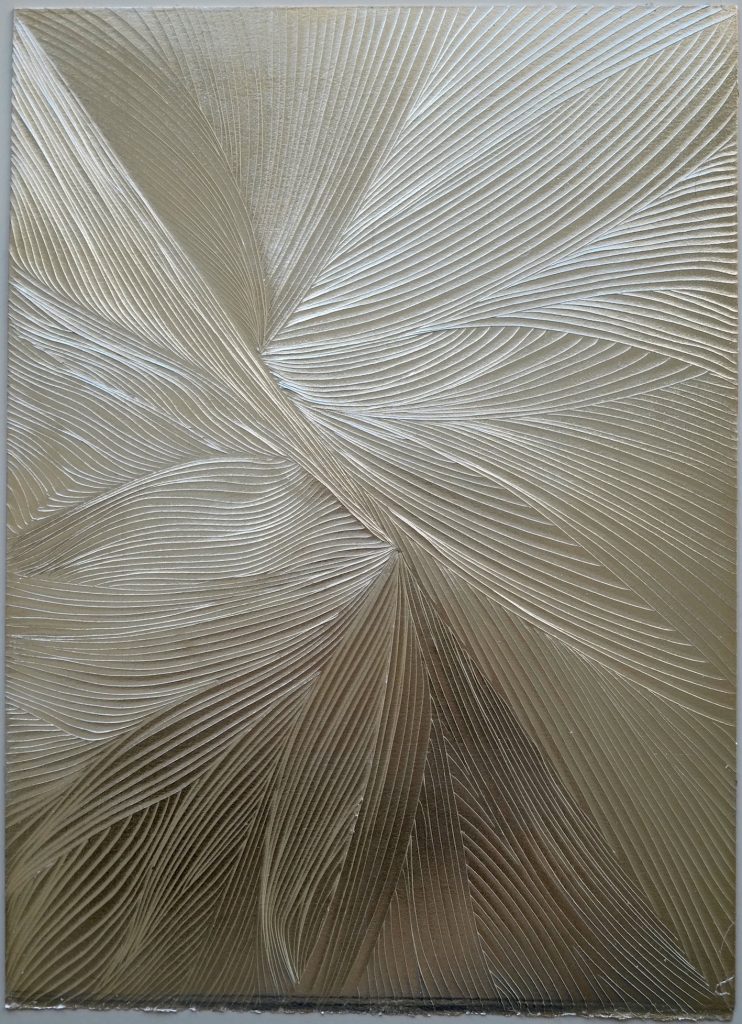 Winston Wächter Fine Art is pleased to announce our third solo exhibition with German-based artist Andreas Kocks. Real Ghosts explores the sinuous properties of paper and metal through elaborate layers of hand carved and laser cut forms. Kocks effortlessly combines painterly linework with the sculptural ingenuity of an engineer, marrying disparate artistic practices with effortless grace. Working with aluminum leaf, coated brass, watercolor paper, and stainless steel, Kocks assembles wildly organic compositions full of implied movement with subdued color palettes. Circles burst outside of any self-imposed container and engage the wall itself as an integral part of the artwork. Soft, elastic textures draw attention to the diverse materiality, as playful, winding shapes overlap and disappear into each other like neural pathways or mangled branches.

Kocks employs brass, metal leaf on paper, and wood to create winding, airy compositions of overlapping and interweaving shapes, embracing the tension between the strong presence of the solid material and the whimsical forms he creates.
Metallic elements are polished to a high sheen, mirroring light and reflecting the gallery and viewer, while negative spaces reveal the surroundings beneath and behind the pieces.
Through this duality, Kocks pulls the encompassing environment and the perspective of the viewer into the work itself.

Throughout the exhibition, Kocks challenges the structure of the art gallery, with a combination of framed and unbounded installations.

Solid Ether, a polished brass composition that bends and winds delicately along the wall, demonstrates Kocks’ playfulness and embrace of opposites.

The installation Opus consists of reflective rectangular structures radiating outward from a pentagonal nucleus, like a sprawling geometric metropolis or star-filled galaxy viewed from above.

Through these evocative works that are both weighty and architectural, delicate and organic, Kocks captures and celebrates moments of fragility and transition, dissolution and progression

Most of his wall installations are site-specific, such as the one he created for Sinkka .

In Kerava, Kocks wanted to blur the borders of the wall space, which is subdivided in two sections and create the illusion of a continuous flowing shape, moving from space to space. This effect is emphasized by the reflection of a glossy grey partition wall. Formed from multiple layers of paper, which Kocks has precut in his studio, the cloud-like shapes spread over the complete 18-meter length of the wall – and thus invite the viewer to experience the whole intersecting movements of the surfaces.

The artwork’s large dimension, the delicate material and the greyish background all have inspired the artist to come up with the title: Elephant’s Breath.

Unbeknownst to Kocks, he has added another layer of meaning to the work through Kerava’s historical circus, which once upon a time housed their elephant, Pepita, next to Sinkka…

As well as cutting the paper, Kocks has engraved relief type images, which are barely discernible on the papers surface. His working process resembles that of drawing with a knife, with the exception that there is no way of fixing any possible mistakes. Each cut is final. The thin lines mark out the edges of the space, over which the cloud-like forms move, like a soft breath of air.

Andreas Kocks lived and worked in New York for almost a decade, but now primarily lives in Munich. He studied sculpture at the Düsseldorf Art Academy from 1980 to 1988, received the Pollock-Krasner Award, New York in 2006 and was a Lecturing Artist at the Savannah College of Arts and Design in 2010/11. He always focused on the integration of  Fine Art and Architecture, which is evident in his exhibition pieces, as well as in the public and private commissions he has created for museums and collections worldwide.